There is a practical range for the detection of chiral compounds by polarimetry, extending between the diminishing returns predicted by Drude’s Equation and possibly substantial deviations seen at lower detector wavelengths, some so extreme that a change in polarity is observed. A blue LED provides a light source at the center of this range, and is the basis for a modified polarimetric detector having improved sensitivity to a wider range of compounds.

This poster describes the performance of the latest iteration of the CHIRALYSER Polarimetric Detector, which incorporates such an “optimized wavelength” blue LED as its light source. Examples of chromatography showing information-distorting effects of too-low wavelengths (including polarity
switching) as well as sensitivity improvements seen as a result of lowering too-high wavelengths toward the optimal one are presented.

The dependence of rotational strength of optically active molecules on the wavelength of light used for measurements is described by “Optical Rotation Dispersion”, or “ORD”. This property is specific to each chiral molecule and differs in intensity. In general, however, it shows greater rotational strength for shorter wavelength light in the so called Plain Curve. The Plain Curve is a graphic depiction of Drude ́s equation, which describes the normal behaviour of ORD in absence of chromophores or otherwise far away from an absorbtion band.

Within or close to a strong absorbtion band, the Plain Curve may become abnormal and no longer obey Drude ́s equation. Such regions of abnormality are said to display Cotton Effects, in extreme cases causing an apparent change in the polarity of a measured species.

Both situations — the predictions for the effect of wavelength on signal strength (i.e., the Plain Curve of Drude’s Equation) and the deviations from the Plain Curve caused by Cotton effects — are represented by the blue and red curves in Figure 1.

R-(-) Camphorquinone and (+) Methyltestosterone were chosen as models to demonstrate both Drude’s Equation and deviations from it due to Cotton effects.
Figure 2 shows four sets of chromatograms, each run at a different wavelength, which have been arranged along the x-axis so that the wavelengths are approximately linear. Settings other than wavelength were the same (baseline variations are characteristic of the wavelengths used). Note that the measurements are taken using the CHIRALYSER polarimetric detector, which uses a Faraday Compensation electronics scheme; signal strength is therefore not related to light amplitude (and different light sources may therefore be used
for demonstration purposes).

From a comparison of the chromatographic traces of Figure 2 and the curves of Figure 1, one can see a correlation to the Plain Curve for the three higher wavelengths (i.e., for 430, 520 and 589 nm). The chromatogram at 370 nm, on the other hand, shows deviations from the Plain Curve: that for (+) Methyltestosterone shows a lessened signal strength; that for (1R)-(-)-Camphorquinone shows an even greater aberration: an apparent switch in polarity.

A relatively small percentage of unknown samples may display such extreme Cotton effect behavior. On the other hand, the fact that some do suggests that a light source should have a wavelength that is comfortably away from strong absorbance bands. A proposed range for source wavelengths that balances the risk from Cotton effects with the desirability for increased signal strength is 400 – 460 nm, as shown by the shaded area of Figure 1.

Why not a laser?

A polarimetric detector can use any light source, e.g., a laser, a lamp (incandescent or ionizing) or an LED.

A laser may have problems of beam alignment in commercial machines: birefringence effects at the opening of the flow cell, as well as problematic alignment down the cell can produce undesirable effects. A lamp is subject
to fluctuations; it is relatively noisy. An LED, on the other hand, presents the ideal light source for polarimetric detectors. Since an LED produces some (small) bandwidth of frequencies, birefringence effects from light
passing by flow cell window edges or extinction effects from its contacts with cell wall surfaces are not a problem. Further, fluctuations in light from an LED are minimal. An LED has the added virtues of being rugged and extremely long lasting.

A Polarimetric Detector (a.k.a. “Optical Rotation Detector”, “ORD”, “[polarimetric] Chiral Detector”) is a useful instrument for detecting and measuring chiral molecules in HPLC. Solutions of such molecules have
the property of rotating plane-polarized light in a preferred direction and to a specific degree. This property is specific to each chiral molecule, and is what is measured by the detector.

Information from a polarimetric detector yields two “bits” of information about a chiral sample: its direction of rotation — denoted by signals above the baseline for “positive” rotators and below for “negative” rotators — and its signal strength.

The “two-bit” information generated by the Polarimetric Detector leads to a number of useful applications.

According to Drude’s Equation, plane-polarized light of decreasing wavelength will produce a stronger rotational response in chiral samples. This is represented by the so-called “Plain Curve” (blue line).
However, at wavelengths lower than ~ 400 nm, deviations from this prediction may be seen for some percentage of samples, some extreme. These deviations are represented by the red line – with the changes shown meant to mean “anything can happen”. 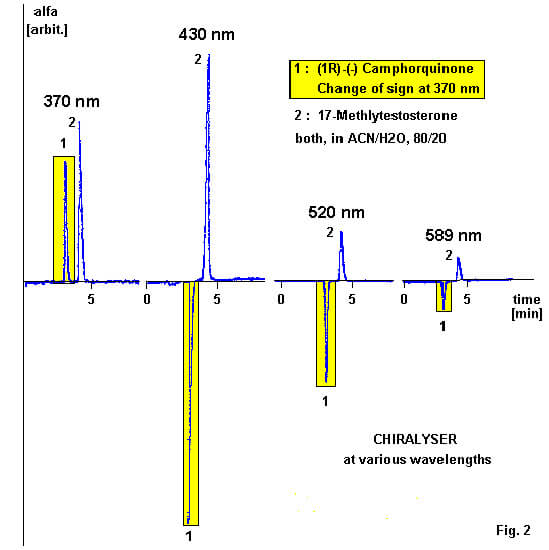 FIGURE 2:
CHIRAL SPECIES THAT DEMONSTRATE BOTH CONFORMANCE TO THE “PLAIN CURVE” AND COTTON EFFECTS AT VARIOUS WAVELENGTHS 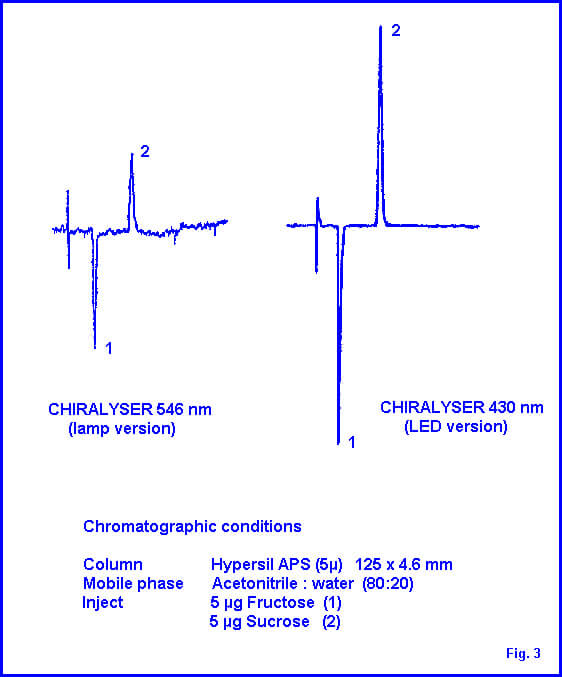 The “quieter” and lower wavelength (430 nm) LED light source has increased the sensitivity of the latest generation CHIRALYSER markedly. All settings for these reference standards are the same, although other improvements (sampling rate; automatic optimization of the optical bench) have also contributed to the overall performance.